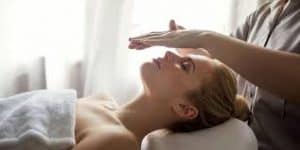 Is Reiki bad? No, it doesn’t pose any adverse side effects to people who undergo this spiritual healing ritual.

However, it poses a valid inquiry. Unlike medical-based treatments, Reiki, or a spiritual energy technique, doesn’t undergo rigorous studies to prove its effectiveness in clinical settings. This causes many skeptics to raise their suspicion and question the legitimacy of Reiki.

After all, for physicians and practitioners to recommend methods of treatment, they’d need evidence of its safety and effectiveness. But with millions of people undergoing Reiki therapy and many physicians recommending it, there’s some merit to this therapy.

Reiki is a spiritual practice where a practitioner puts their hand position over a client’s body to promote their wellbeing. Healing extends not only in the physical realm but also in the person’s mental, spiritual, and emotional faculties. Practitioners can also undergo self-treatment with Reiki.

Reiki broke out in popularity when Dr. Mikao Usui spread the word about its abilities to heal. He first stumbled upon Reiki during a 21-day trip to Mt. Kuruma. He discovered the healing potential when practicing the ritual on himself. Then, he spread it to his family and the whole of Japan after years.

Healing comes in the form of many ways—from relieving chronic pains and headaches to clarity from emotional trauma. Whatever the case, many Reiki rituals specifically fit the needs of the problems of individuals.

How does Reiki work?

Healing doesn’t come from any ingestion or intervention as a form of medical treatment. Instead, a person undergoes the process with the transmission of the life-giving energy known as Ki.

This alternative method restores the balance within the body, contrary to how medical researchers would typically attribute treatment methods.

First, the client lays down on a flat mat or therapist table and is asked to relax. The practitioner (or someone who’s undergone Reiki training) becomes the conduit aimed to remove the patient’s energy blockages.

Related: How Is Reiki Performed in Practice?

What research has been made with Reiki?

There have been numerous studies conducted that evaluated the legitimacy of Reiki. Some provided evidence that it does help relieve illnesses, while other studies failed to deliver any promising results.

A study by David McManus found that Reiki is more effective than placebo. In a 13-person study, around 8 have had noticeable positive benefits from Reiki. And only one showed evidence of the contrary.

Furthermore, a study by Janice Joyce reported a lack of benefits from Reiki when it comes to depression and anxiety. Although, this method has mostly been conducted as narrative experiences rather than utilizing quantifiable variables.

One more study from Melike Doğan studied the effects of Reiki on healing pain. This was evaluated using a VAS pain score. The 104 participants (against a control group of n=108) reported feeling less pain after treatment. This proves that this method works in relieving physical pain.

While not the be-all-end-all solution, Reiki is a safe and gentle health alternative method. By undergoing it, patients activate the parasympathetic nervous system to help their body and mind heal.

What are the side effects of Reiki?

While Reiki is considered to be a safe practice, some side effects may occur after the session. However, these effect are normal and don’t cause any harmful and long-lasting repercussions.

While most people report feeling relaxed and reinvigorated, many people also report feeling exhausted and drained after a session. It may also rarely come with headaches, stomach aches, and fatigue or weakness.

According to practitioners, this is a normal side effect for your body since it means your body is healing.

Some scientists regarded this as a negative placebo effect since no other side effect has been observed in the study.

In a Reiki session, patients lie down on a flat mat or massage table under a dimly lit room. Practitioners won’t converse with you and the only sound you’ll hear is soft, relaxing background music.

For some patients, this could induce anxiety, panic attacks, or a hindered ability to relax.

What do skeptics say about Reiki?

US Roman Catholic bishops deemed Reiki an inappropriate therapy based on scientific and theological guidelines, lumping it as “superstition”.

This is due to its origins stemming from Eastern tradition and philosophy while being relatively unknown in Christian traditions.

Becoming a doctor takes years of training and study. Reiki training doesn’t come with nationwide standards, and anyone can call themselves a master after a weekend-long training.

Since it has a low barrier to entry, skeptics may hold concern over the credentials of practitioners. And this suspicion stains and spills over the practice as a whole.

There have been countless anecdotes highlighting the positive effects Reiki had on patients. But there’s also a crowd of people who haven’t received the same benefits that others had.

Unlike clinical treatments that treat a specific illness, Reiki works to promote holistic health and wellness to the body. And in many cases, the results are also subjective by nature. (i.g. “I feel less depressed.”), making it harder to quantify.

This makes it an attacking point for many skeptics since there’s little scientific backing to support a practitioner’s claims.

Reiki isn’t a bad practice, but rather it’s safe and effective. However, keep in mind that relying on this alternative health form alone could cause severe health-related consequences.

It can’t heal cancer or heart disease. But it can help relieve the pain, which makes many clinicians drawn to recommending it to their patients.